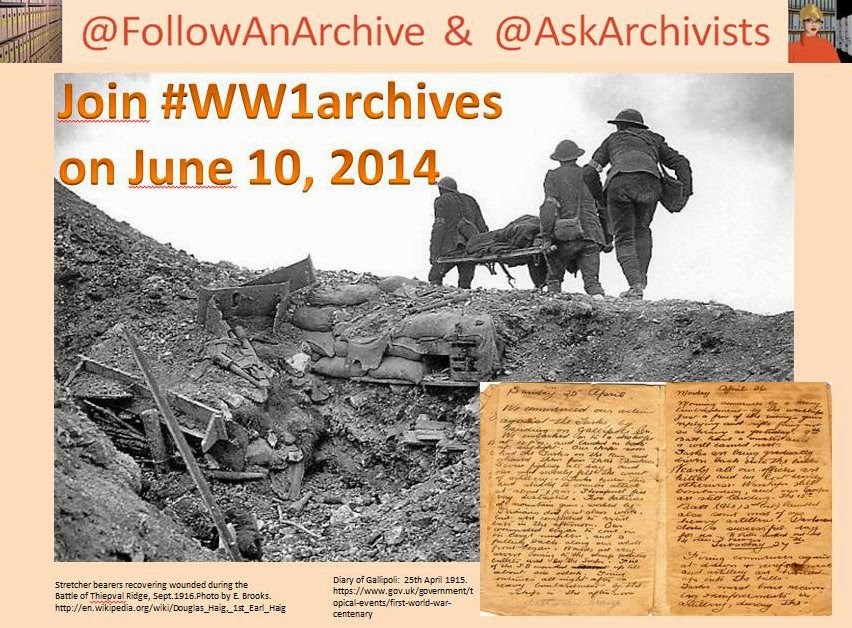 Twitter event on June 10, 2014
In 2014 International Archives Day (June 9) falls on Whit Monday or Pentecost Monday. Most archives are closed that day. So we decided to organize the annual Twitter event on Tuesday, June 10.

World War I – 1914-2014
The German archivist Thomas Wolf from SIWI-archives came up with a good idea: let’s pay attention to the beginning of the First World War or The Great War, that began 100 years ago in 1914.

The Great War in archives
We ask all archives and other heritage organizations to search their collections for documents related to the First World War 1914-1918. Even countries that were neutral during the Great War, can perhaps find some records about, for instance, aid to refugees, or military or financial support to soldiers, families, countries in need.

Subjects to look for and tweet about
Archival documents, records, newspapers, pictures, drawings, postcards, paintings, etc. about:
- Soldiers
- Families and loved ones of soldiers
- Battlefields
- Refugees
- Aid / Support
- Governments
- Weapons
- Mobilisation
- Diseases
- War cemeteries
- History before, during, after 1914-1918, all related to the First World War