Charlotte made a powerpoint presentation of the outcome of the #followanarchive survey.
It was a great day! Thanks everyone for joining!
Posted by followanarchive at 12:07 PM No comments:

How did #followanarchive work out?

Thanks to everyone for your support on our first day! You've made us this happy... #followanarchive

Bradley Headland, working at the National Archives of Australia, was very enthousiastic and we asked him to write a blogpost for the #followanarchive blog about his experiences and thoughts about #followanarchive day. And he did! Look here and read how he got the CAARA delegates on twitter on November 12! Bradley tweeted:

The records we hold tell the story of who we are, where we came from and how we got here.

#followanarchive day in the Middle-East, Africa and Europe
In the mean time November 12 had started in the Middle-East, Africa and Europe. We couldn't find any twittering archives in Asia.
It was fabulous to see how the archives did their utmost best to recommend their collections. In The Netherlands, the UK and the Nordic countries there were a lot of participating archives. Archivists in countries with only a few archives on twitter or none at all, were also joining. Archives, archivists and followers recommended many archives to there followers and told them the reasons why they should follow archives.
In Spain we couldn't find any archives on twitter. How much joy we all had when Paco Fernández Cuesta, Historian and Technical Assistant in the Archives of the Royal Chancery of Valladolid, came up with two Spanish archives! Sierra Pambley and the Municipal Archives Arganda del Rey in Madrid.
We challenged French archives to act:

French #archivists! @pacofernandez came up with two twittering Spanish archives. Can you do the same for France? #followanarchive

In Africa especially the SABC Radio Archives were very active on November 12! They followed al lot of archives and archivists over the world and were very pleased with #followanarchive day, as all participating archives were ;-)

#followanarchive day in the America's
In the mean time the America's (South America and North America (we couldn't find a twittering archive in Central America) had joined #followanarchive day. With only two participating archives in Latin America, there came a lot of tweets from Brazil.
Many archivists and tweeps who are fond of archives were on twitter that day.
PickeringChatto in the UK tweetet:

Amazed at the number of archives/archivists on Twitter - they’re taking over! etc etc.

And North America also did great things on #followanarchive day! Archives showed photographs of there oldest document, there most special map, their funniest photograph or cartoon, etc.

Archivists are so cool!
Some tweetqoutes:
A follower tweeted:

I didn't know archives had so much to offer!

@followanarchive thanks. You inspired me to start an archive twitter, rather than using the one for my business.

I love how the event put me in touch with archivists world wide in compact time. And broadened the awareness of archives!

My favourite #archives joke for #followanarchive day: Where did Noah keep his bees? In the ark-hives!

Archives rock!
It was a phenomenal, fabulous #followanarchive day! We've enjoyed every second of it!
Thanks to all archives, archivists an followers who made this day one of the most splendid day in archives history!
One of the tweeps shouted: 'ARCHIVES ROCK!' This tweet was retweeted many times. And we agree: 'Archives rock'!
We will add some statistics on this blog too and of course the outcome of the survey many of you filled in, thanks!
Also thanks every one who wrote (or is going to write) a blogpost or webs article about #followanarchive day. Much appreciated!

ARCHIVES ROCK!
ARCHIVISTS ARE SO COOL!

Posted by Anneke
Posted by followanarchive at 3:14 PM 2 comments:

Make your own followanarchive promotion video

Challange: make your own follow an archive promotion video.

Use your Flip, you smarthphone, handycam. Use VuVox, JayCut or Go!Animate. Use your inspiration. Be creative.

Posted by poulus at 5:05 PM No comments: 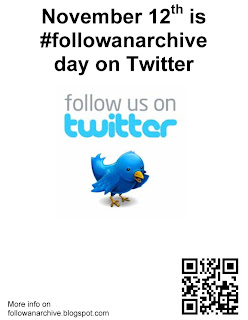 We have made a poster.
You can use it to promote your archive on twitter and
to promote #followanarchive day.

Download
Print
Fill in your twittername
Hang it.
Posted by poulus at 3:39 PM No comments:

We've made a banner to promote #followanarchive day. Feel free to copy the banner. You can use it on your blog / website.
Posted by poulus at 12:55 PM 1 comment: